Altough many research efforts are led to the increase of the efficiency of fosil fuel consuming devices, in order to reduce CO2 emissions, another interesting approach is to utilise this CO2 as a raw material to produce different products. Researchers hope to show that this could make an impact on climate change. This was commented in an interesting recent article in Nature.
Posted by Jorge García-Cañadas at 20:55

The latest type of flow battery, located at Pullman (Washington) store energy in tanks filled with liquids and has the potential to be cheaper than their conventional solid counterparts and more adaptable to the needs of electrical grids. The Pullman flow installation, made up of big white boxes stores more than enough energy to run four average homes for a month.

Although the installation holds only a fraction of the power the grid will require, it is introducing a new generation of energy-storage technology. Existing batteries such as lithium ion and lead acid do not provide the necessary combination of long-term energy storage and rapid delivery of energy.

Flow batteries could provide an alternative. They can store energy for a long time and provide it quickly when needed. They are liquid-based, so safer than conventional batteries. Because the energy-storing liquids are kept in external tanks, changing their storage capacity is relatively simple. Most importantly, if researchers can develop the right combination of chemistries, flow batteries could be much less expensive over their lifetime than existing batteries.

For more information you can read the whole article in Nature.
Posted by Jorge García-Cañadas at 20:48

A very unique material with outstanding heat-storage properties has been reported this month in Nature Communications. The research group of Shin-ichi Ohkoshi at the University of Tokyo have synthesised a lambda-trititanium pentoxide, λ-Ti3O5, which exhibits a solid–solid phase transition to beta-trititanium pentoxide, β-Ti3O5. This feature makes possible the storage of a large latent heat energy (230 kJ/L) that can be released by applying a small external pressure (~60 MPa) only when demanded. In general, such heat-storage materials cannot store the energy for a prolonged period. 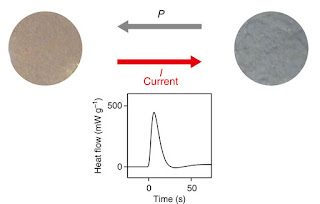 Images of the different phases of Ti3O5 produced by a change of pressure and in current. Below is the heat energy released by application of pressure at t=0. Images from Nature Communications.

The development of high-performance heat-storage materials is important for a more efficient use of waste heat in factories and residences. Moreover, λ-Ti3O5 is a metallic conductor and β-Ti3O5 is a semiconductor, this offers possibilities to realise pressure-sensitive conductivity sensor or pressure-sensitive optical sensor. On top of this, light-induced and current-induced phase transitions from pressure-produced β-Ti3O5 to λ-Ti3O5 are also possible, which are very attractive for advanced electronic devices.

It is not easy to find a material with such outstanding properties and offering the possibilities to apply its unique features in a wide range of applications.
Posted by Jorge García-Cañadas at 13:35

One thing in common with most of the emerging optoelectronic technologies is the requirement of highly transparent, conductive and flexible substrates. Emerging low-cost solar cell technologies, OLED screens, and wearable devices mainly use conductive oxides (ITO or FTO) with lower conductivity than metals. This significantly obstruct their efficiency (or increase their energetic consumption) due to the high substrate resistance that appears when the devices are scaled-up.

Metals with ultra-thin thickness (less than 10 nm), enough to allow light transmittance while keeping suitable conductivity, have been proposed as a promising technology to achieve flexible and transparent conductive substrates. Under this research line, researchers at the Gwangju Institute of Science and Technology in South Korea, have created an ultra-thin Ag film sandwiched between two polymers with outstanding properties, such as a bending radius <1 mm, a visible-range transmittance higher than 95 % and a sheet resistance lower than 10 Ω /sq. Polymer solar cells that incorporate the new electrode exhibit a high power conversion efficiency of 10 % and a fabricated polymer light-emitting diode outperform those based on existing transparent conducting oxides.

The key idea to achieve this new electrodes is a novel method to produce uniform and strong metallisation points on the plastic substrates in which the nucleation centres are densely distributed over atomic-scale distances. In this way, Ag droplets were fixed on functional amine groups of a solution-processed non-conjugated polymer (polyethyleneimine). This method allows a more suitable growth of the metallic film, which previously grew forming separated islands and hence required larger thickness to interconnect them and effectively conduct electricity, which reduced the optical transmittance.

To complete the electrode, a PEDOT:PSS conducting polymer is deposited on top of the Ag film acting as anti-reflection layer, minimising the light reflection induced by the metallic Ag layer. More detailed information can be read in the article published in Nature Communications.
Posted by Jorge García-Cañadas at 19:34

Researchers at Stanford University, lead by Prof. Yi Cui have proposed a new idea to improve the thermal insulation of our clothes and even being able to increase their temperature to fit our comfort. About half of the global energy consumption is spent in indoor heating. Most of efforts to reduce this are focused on improving building insulation. However, the Stanford group proposed a different approach targeting at our own clothes. They proved that coating clothing with a mesh of silver nanowires provides better insulation than regular clothes and also can be used to generate its own heat.

(Concept and picture of the nanowires cloth at the left part. On the right top a glove with a S letter coated with the nanowires that remains colder than the rest of the non-coated glove in the IR camera picture at the bottom right. Image from Nano Letters)

Metals can reflect back the body heat more efficiently than fabrics, but they are hard and clothes require soft materials. For this reason they used metallic nanowires. Since metals conduct electricity, by means of a mini battery, a small current can be passed through the nanowire mesh producing heating by Joule effect. Their results can significantly contribute to change the way we heat our buildings and can be seen at Nano Letters.
Posted by Jorge García-Cañadas at 13:13

Six Materials That Could Change Our World

Graphene (for multiple applications) and perovskites (for solar cells) are two very exciting materials that have captured the attention of the scientific community and are being intensively investigated. They could significantly change our current technologies and our society. But apart from these two, there are other very interesting materials somewhat less popular. In this link a list of six materials that could change the world has being composed. Among them you will find aerogels, self-healing polymers, stanene, light manipulators and thermoelectrics.

Regarding the latter class of materials, the company Alphabet Energy has recently fabricated a powerful generator that can be used directly in exhaust pipes. The video above shows all the generator's features and design.
Posted by Jorge García-Cañadas at 09:51