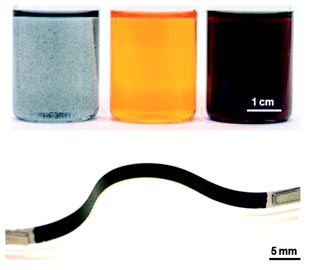 (Picture of a P3HT/CNT composite TE from Bounioux et al.)

Last year, Xavier Crispin and co-workers from Linköping University in Sweden achieved the polymer-based TE material with the highest ZT (0.25) at the moment. Their results were published in Nature Materials. They were able to provide PEDOT with an electrical conductivity over 1000 S/cm by replacing the PSS anion with tosylate. Additionally, this week another breakthrough has been reported in Nature where it has been shown that the carrier mobility in conducting polymers can be significantly increased (up to 8.5 cm2/Vs) by covering the delocalised π chain with macrocycles, rising another promising opportunity for more improvement of electrical conductivity.

Another approach that is currently being intensively researched is the preparation of polymer-based nanocomposites, where the polymers are complimented with the properties of nanofillers such as carbon nanotubes. One of the main achievements in this strategy has been reported by See et al. who prepared composites of PEDOT:PSS with Te nanorods, which resulted in a figure of merit ZT=0.1.

If you want to gain more insight into this topic, some recent reviews has been published by He et al. and  Bubnova et al.
Posted by Jorge García-Cañadas at 18:59