Challenges for a Sustainable Energy Future

Nobody discusses that one of the main problems that the society has to face in the future is the problem to achieve sustainable energy sources that will not damage our planet. Few days ago, an excellent article has been published in Nature about this topic. There is a sentence on it that specially stood out to me:

"The world needs another industrial revolution in which our sources of energy are affordable, accessible and sustainable."

This sentence is given after the introduction of the beginning of the industrial revolution in the mid-eighteenth century, when we started to develop our ability to exploit fossil fuel energy sources. The carbon emissions that result from this capability have created significant climate-change risks nowadays.

We tend to think that intense research efforts are needed to improve efficiencies of renewable energy devices and systems, but this is a significant step out of some others. To achieve the full economic benefit of these variable sources of energy, they need to be integrated with the current sources into transmission and distribution, load response and storage. A transformation of the electricity system on the basis of technology advances and new operating procedures, business models and regulatory approaches is extremely important.

The last part of the articlee remarks that due to the fact that we have improved the technologies in finding and extracting fossil fuels, the cost of these forms of energy could remain competitive with carbon-free sources for decades. This does not favour the urgent need to use renewable sources, what makes essential the contribution or government policies to stimulate the invention, innovation, and align the market forces.

There is increasing evidence that the increment in the number of extreme weather events (extreme temperatures, floods, wildfires, droughts and storms) over the past 30 years are linked with climate change. It is our responsibility to act now and it is not only a task for scientist, it requires the engament of scientific, financial, and public-policy communities, as well as the general public.
Posted by Jorge García-Cañadas at 18:54

Some people might be surprised and sceptical when reading the title of this post, since they might presume that a material absorbing light cannot be transparent. However this could be possible since the sunlight spectrum is not only formed by UV-Visible light but it also has a large percentage (~50 %) of IR light. If we can make a cell only absorbing UV and/or IR, we can have a transparent device, which is the novel polymer solar cell presented by Yang Yang and collaborators from the University of California, Los Angeles (UCLA). 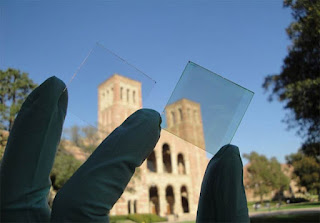 These cells open the possibility of energy harvesting in a new wide range of applications such as windows and portable electronics, where you could be able to charge your mobile from the energy collected by the screen. This novel device relies on two achievements. First, a polymeric material sensitive to near-IR light but highly transparent to visible light. Secondly, high performance Ag nanowire-based composite works as the transparent conductive material in the cathode, role usually adopted by different metals that are opaque. The device reaches almost 70% transparency at 550 nm with an overall 4% efficiency.
[Article link]
Posted by Jorge García-Cañadas at 08:51