Solar Thermophotovoltaic: Designing the Sun for the Solar Cell

The way the single-junction solar cells generally work is by directly absorbing the sunlight through a semiconductor layer corresponding to a certain bandgap. However, the solar spectrum is broad. Photons with energy below the bandgap are not absorbed and photons with energy above the bandgap generate electron–hole pairs, but these quickly relax to the band edge losing some of their initial energy. The combination of these two loss mechanisms defines the Shockley–Queisser limit, which states that a single-junction cell cannot have efficiencies exceeding 41%.


In some way, the Shockley–Queisser analysis indicates that the efficiency limit has more to do with the Sun. If the Sun emitted only photons with energy immediately above the bandgap of the semiconductor, both loss mechanisms in the Shockley–Queisser analysis would be supressed and the same single-junction cell would approach an efficiency of 95%, the highest allowed by the second law of thermodynamics. 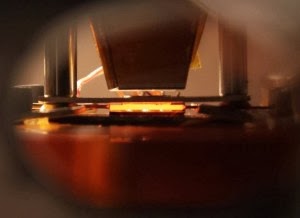 (Image of the solar thermophotovoltaic system developed at MIT)

The solar thermophotovoltaic system tries to take advantage of this fact. In this system, an intermediate element is placed between the sunlight and the solar cell. The element includes a solar absorber which can absorb the entire solar spectrum on the side that faces the Sun. On the other side, the element, which becomes very hot, can be designed to generate by thermal emission narrow-band radiation tailored to the bandgap of the solar cell. A significant advantage of this design is that potentially all solar energy could be converted into electricity.


In the past, efficiencies have struggled to reach 1%. However, Evelyn Wang and colleagues from the MIT have reported in Nature Nanotechnology an efficiency of 3.2%. This has been achieved by employing an absorber made of vertically aligned multiwalled carbon nanotubes which provides near-complete absorption over the broad solar spectrum. The emitter includes a one-dimensional photonic crystal made of multilayers of Si and SiO2, optimized to achieve spectral matching between the thermal emission and the bandgap of the InGaAsSb, strongly suppressing sub-bandgap thermal radiation.

This impressive demostration highlights the less usual strategy of controlling the light that reaches the photovoltaic element as a promising line to further develop the current state-of-the-art of the photovoltaic systems.
Posted by Jorge García-Cañadas at 22:23